Yemen and its Millennium Development Goals 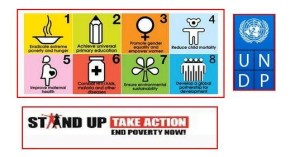 MOST OF THE MILLENNIUM GOALS HAVE NOT BEEN MET PARTLY BECAUSE OF THE REVOLUTION IN 2011 AND PARTLY BY THE GLOBAL FINANCIAL CRISIS OF THE LATE 2000’S.  WILL THE NATIONAL DIALOGUE ENABLE THE PACE TO BE STEPPED UP IN ORDER TO ACHIEVE THESE ESSENTIAL GOALS?  HERE IS A REMINDER OF THOSE GOALS:*

The humanitarian situation has become far worse since 2011 than ever experienced in the past 50 years.  50% of Yemen’s population is hungry, 30% of under 5s are malnourished.  Donors at the Friends of Yemen conferences have pledged billions of dollars in aid but most of this is yet to materialise.

Although some progress has been made on this, almost 2 million children are still not in school.

Gender equality at home and at work is yet to occur.  There is still very little representation of women in local government and little involvement of them in strategic decision-making proceses. On the home front, women who seek divorce from their husbands are often denied the right to do so by the judge who can force the two parties to attempt to reconcile, even when the marriage is beyond repair in her eyes.

Although measles immunisation has been successful where applied, mortality of under-fives has not been significantly reduced.  Public health facilities are still seriously inadequate in the rural areas which contain approximately 75% of Yemen’s population.

Maternal mortality rates are actually increasing.  Lack of facilities, staff, and information about health matters, especially in the rural areas, have contributed to this.

Not much is known about the incidence of HIV/ AIDS in Yemen.  TB and malaria treatment is improving but more funds are needed for this area.

Access to clean water for drinking and domestic use is essential for improved public health, as are sanitation systems and appropriate housing.  Scarce water resources is one main challenge to development in Yemen and means that Yemen is by no means able to achieve the goal of environmental stability by 2015.

8) DEVELOP A GLOBAL PARTNERSHIP FOR DEVELOPMENT

With basic supply of infrastructure essentials such as electricity being constantly switched on and off, it is hard to see how internet usage can increase in order to achieve this goal.

* Source taken from UNDP – Will Yemen be able to achieve its MDGs by 2015? Status at a glance.